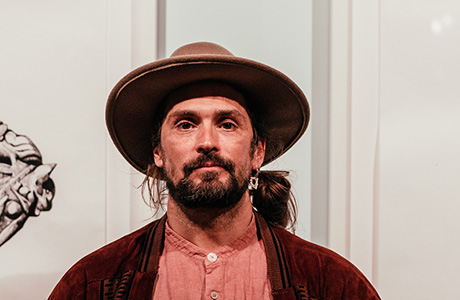 His family has strong ties to Angola. During the Angolan War of Independence, his family moved to Portugal and encountered discrimination.

Despite being born in Portugal, Carvalho grew up surrounded by Angolan culture, from the music of Rui Mingas to the descriptions of African landscapes that his family shared with him.

He studied Visual Arts at the Upper School of Art and Design in Caldas da Rainha, and obtained a Master’s degree in Performing Arts at the University of the Arts (UdK) in Berlin, a city where he has lived and worked since 2009. In works such as If My Grandmother Was an Historian (2015) and Demythologize That History and Put it to Rest (2018), he explores the myths, celebrations and absences of official history about the colonial past, from a domestic, national and European perspective.